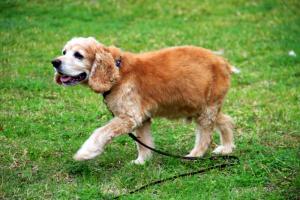 Morrie’s Guardian Angel Fund was established as a way to cover expenses for treatment above and beyond the regular veterinary services our Cocker kids receive while in our care. Morrie’s Fund helps cover the cost of treatment for heartworm disease, injuries, illnesses, conditions like cherry eye, and the effects of long-term neglect, thereby removing these conditions as barriers to finding a good home. When confronted with so many innocent dogs who do not have a second chance, Morrie’s Guardian Angel Fund is truly a blessing . . .to these very deserving Cockers, to the families who adopt them into their homes and hearts, and to all of us who celebrate every life saved.

Morrie was a product of breeding mills in the Midwest that churn out puppies assembly-line style. After a stay in a less than reputable pet store, he was adopted by a family who was ill-prepared to meet the needs of a young pup. Fortunately, the mother of the family had the good sense to try to find him a different home after it was determined that he was being abused by neighborhood kids while chained outside the home. Morrie came to live in his forever home with us when he was 10 months old. Morrie was a feisty guy who put on a real tough act even when he was clearly frightened. Our other Cocker kid, Maddie, was already a part of our family, and she came from a very different background. Much more comfortable in the world at this point and a year older, she let Morrie know that she was in charge and did much to help him learn a routine that brought him comfort. Morrie and Maddie became inseparable and followed their caretaker from coast to coast for 12 years as his career path would take him. From California to New York and many places in between, “M&M” made dog and human friends wherever they called home. In his own scrappy way and much in the same manner in which he scared off a coyote in the hills above LA years before, Morrie fought hard to not let cancer hold him back. He made the most of life right up until the end. He lost his battle in January of 2012. Having gone through the expense of everything from the usual Cocker ailments such as cherry-eyes and ear infections to battling cancer, we understand that these medical costs can be a barrier to Cocker Rescue kids being adopted. It is our hope that the funds available through the Morrie’s Guardian Angel Fund will help in making more good homes available to Cocker kids in the Central Texas area.